The Community Response Team was designed and founded to operate as a specialized unit that would focus on non-traditional patrol techniques. The goal of the unit is to allow zone officers to focus on crime prevention, proactive and directed patrol, and special enforcement by minimizing the need for them to investigate time consuming incidents, such as traffic collisions and/or hit and run incidents.

The Community Response Team is also charged with patrolling areas of the city not easily accessed by regular patrol officers such as the city’s cart path system and parks and recreational areas. CRT utilizes alternative modes of transportation to accomplish this mission, to include bicycles, all terrain vehicles, a motorcycle, and foot patrol. View the motorcycle officers completing their motorcycle training course.

While the duties of the Community Response Team have been expanded considerably since its inception, its primary responsibility remains traffic enforcement and vehicle collision investigation. When available, CRT officers are dispatched as primary investigating officers to motor vehicle crashes, traffic complaints, traffic fatalities, hit and run accidents, aggressive driving or road-rage incidents, and citizen reports of intoxicated motorists.

In the event of a serious motor vehicle crash or fatality, CRT is dispatched as a team to investigate the accident. Often this results in an extensive investigation, followed by a very detailed report. 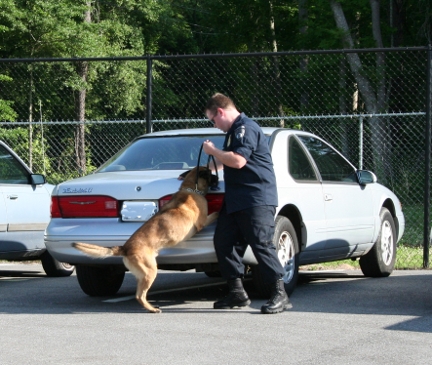 The Peachtree City Police Department has partnered with the Georgia Governor’s Office of Highway Safety (GOHS) for many years to support traffic safety campaigns. As part of those efforts, the Peachtree City Police Department is a member of the Metro Atlanta Traffic Enforcement Network (MATEN). The State’s 16 regional Traffic Networks provide an organized forum for officers to network with others from their area, share resources, and keep current on emerging trends in traffic safety. MATEN holds monthly meetings around the Metro Atlanta area that are attended by Law Enforcement Officers from the 63 agencies located in the network area. Each meeting also includes a training session and attending officers are eligible to receive traffic safety related incentive items that can be used in their jurisdiction to further their agencies’ goals of traffic safety. The additional law enforcement resources at the meetings are also often used to help supplement the hosting jurisdiction’s staff so that they can conduct large scale traffic safety events, such as impaired driving checkpoints, that may have otherwise been impossible or very costly to staff. Each network is coordinated by an officer from one of the participating jurisdictions. This officer is elected by the members and serves a three year term. In 2012, Lieutenant Matt Myers with the Peachtree City Police Department was elected to be the MATEN Coordinator for the 2013 to 2015 calendar years. The Governor’s Office of Highway Safety supplies a grant to the agency within each network that employees the Network Coordinator. This grant is for $20,000 per year. Of that amount, $7,500 must be used to purchase traffic safety incentive items that are given away at the monthly network meetings to participating agencies. The other $7,500 is used by the Network Coordinator’s agency as an incentive for their time used to help with the network activities. $5,000 is available to support the Network Coordinator and his assistants in attending relevant conferences or events. The Peachtree City Police Department will be using this $7500.00 to purchase traffic safety related items that will aid in our mission to maintain safe roadways for all of our citizens and visitors.

For more information on the Community Response Team, email either Lt. Ken Ralls or Sgt. Kevin Brown at or call 770-487-8866.

Find information on how to file a traffic complaint or concern.